Blog » Calling all Panto lovers! Pickering Pantomime is a treat not to be missed!

Calling all Panto lovers! Pickering Pantomime is a treat not to be missed! 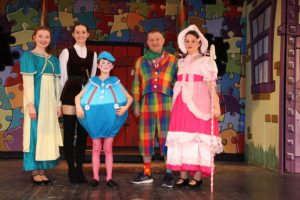 If you are a regular to this pantomime, you’ll quickly recognise the familiar cast and characters who are here again to brighten up those cold and dark January days (and brighten them up they certainly do!).  If you are a first-timer, the traditional format and professional performances all round will take you straight into panto-land and keep you laughing, booing and singing along all the way to the end.

Director, Luke Arnold has done a smashing job with this year’s story, Humpty Dumpty.  As Nursery Rhyme Land is under threat from Freezella, the Spirit of Ice and Snow, Tommy Tucker, Simple Simon and Bo Peep must rescue Princess Crystal from the clutches of the evil Baron Bluebeard of Bohemia and his silent sidekick Frank N Stein.  They are ably helped along the way by the marvellous dame, Queen Ribena and her long-suffering husband Old King Cole all with a sprinkling of magic from Ovaltina, the Egg Fairy and Humpty Dumpty himself.  Each one of these characters brought their own touch of magic to the performance.   Tommy Tucker and Princess Crystal had beautiful singing voices and the partnership between Simple Simon and Little Bo-Peep was both sweet and funny.  Our dame, Marcus Burnside as Queen Ribena stole the show in the way that only a dame can and Steven Temple as Old King Cole played the perfect deadpan foil to such a colourful character.

The strength of the actors was matched by talented performances from the rest of the cast and the very professional work of the production team.  Against a backdrop of marvellous set design and costumes (Old King Cole’s Victorian knitted swimming costume is a sight to behold!) that match the bigger pantomimes in the cities, all the dancers added both sparkle and grace under Sarah Ashworth and Ashton Danby’s well-crafted choreography.

My children (aged 5 and 9) loved the whole performance and their highlights were ‘when Humpty Dumpty came out of the egg’ and the ‘very pretty singing’.  The whole experience was made even better by the friendly Front of House staff at the theatre and, of course, the Ryeburn of Helmsley ice-cream during the interval.

With plenty of physical humour, light-hearted puns and lots of opportunity for the audience to join in, Pickering Musical Society’s Humpty Dumpty is an evening of fun for all the family.   For many children, a pantomime is their first visit to the theatre and this one would most certainly have them coming back for more, even better that it is right on our doorstep!

Claire, one of our lovely users, was given tickets to the performance for the purpose of this review.